This is the wettest winter in Andalucía since 1939. It’s also the coldest and longest. This is not based on official statistics, but what the local people are saying.

We have had a lot of rain lately! It has rained for the best part of three weeks with only the odd dry day. Sometimes heavy, sometimes prolonged, but there has been a lot of it! |As a result, the lake at Las Casillas is at its highest level that I have seen, ever! That’s good, because we should have plenty of water in the summer months. Hopefully other lakes and reservoirs are also full. At the end of the summer, reservoirs were at the lowest levels for years. I read somewhere that reservoirs were less than one third full, so the rain is badly needed.

The olive farmers are also very happy. Usually they find something to moan about; usually it’s the lack of rain. Well they’ve got plenty now!

For those who like statistics, the following table shows the average annual rainfall in the major towns in our area: 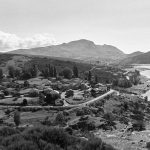