We have signed up for the Cross Pantano del Víboras 2018! The race is on 25 February 2018, starting at 09:30. Dogs are allowed (in the trekking category – we checked), so both Chester and Flo will be with us.

The Cross Pantano del Víboras is an annual race, organised by Department of Sports of the City of Martos and the Athletics Club Correcaminos, which runs along the perimeter of the Viboras reservoir. It is a circular circuit, starting and finishing in the Plaza de la Constitución in our village, Las Casillas. The total length is 14.535 km, 11 of which are on the perimeter dirt track road and the rest on asphalt. This is the third year the race is being organised.

Demand for registration was high and the race was fully booked within a few days. Registration was then closed; however, due to demand, the organisers decided to re-open bookings on 13 February for several hours. That’s when I booked. At the time I didn’t know that the race had been fully booked and that bookings had been re-opened for a limited time. It was just pure coincidence and luck! I later found out that our two registrations were the very last ones!

We were in the trekking category. The race and trek follow the same route, but in opposite directions.

I use the term “race” loosely. Some of the runners took it very seriously, but for the majority it was a fun event. The trek had a wonderful family outing type of atmosphere. Many had brought their dogs along for the walk; we had both Chester and Flo with us. Many of the walkers made frequent stops at scenic locations for group photos and selfies! Like I said, it was a fun day!

Despite good weather forecasts, the morning of the race was overcast and grizzly (grey and drizzly). It had rained in the night. Fortunately, the rain kept off and the weather improved throughout the day.

The starts were staggered so that the trekking and the race proper, finished at roughly the same time. The trekking category started at 09:30 (amazingly for Spain it started only about 10 minutes late!) and went anti-clockwise. See the Garmin plot of the route and section profile below. The Cross Pantano del Víboras started at 11:00 (I don’t know if that started on time because we were half way around the lake by then) and went clockwise.

At about two thirds of the way around, we started meeting the runners running in the opposite direction. There were six in the leading pack. After that they came in their hundreds. We had to keep our dogs on a short lead, so they wouldn’t get in the way!

As we approached Las Casillas and the finish line, the trekkers were taken on a looped detour, so we crossed the finishing line in the same direction as the runners.

We crossed the finish line approximately 2 hours 55 minutes after the start. The grey drizzly weather had given way to a nice warm sunny day. It was fiesta time in the village square and the two local bars! All in all, a very enjoyable day! 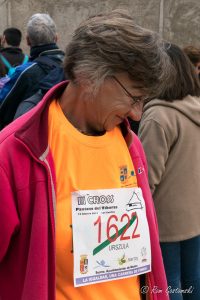 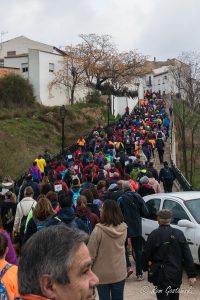 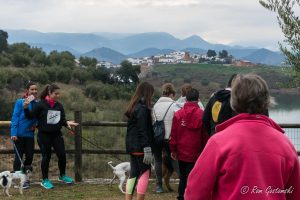 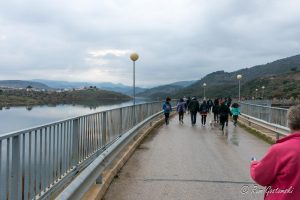 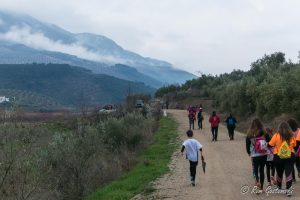 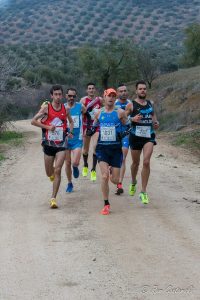 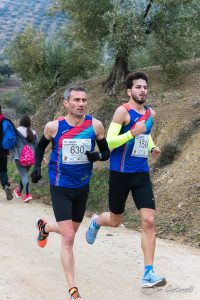 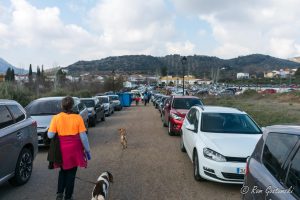 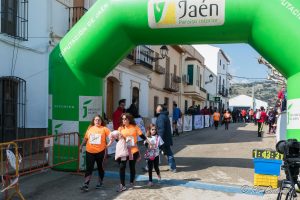 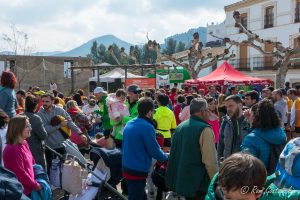 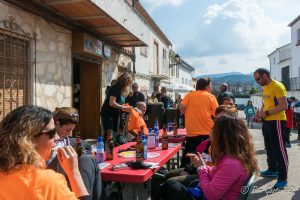 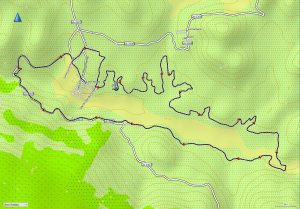